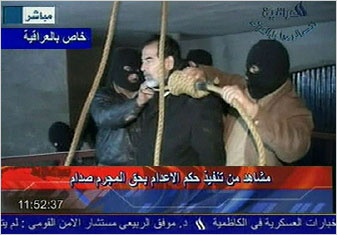 6. You want punishment? Make Saddam sit in a 5x8 cell for 30 years to life. Living is largely pain by definition. Without the entertainment of course. Well okay, let him play several video game titles: Operation Just Cause; Iraqi Invasion, Full Spectrum Warrior - Ten Hammers, lead a team of Seals through a fictional city in Iraq, death of civilians is frowned upon, but allowed.
Posted by James Mason at 4:33 PM No comments: