The Human Plant Hybrid Cell Could End Hunger and Starvation 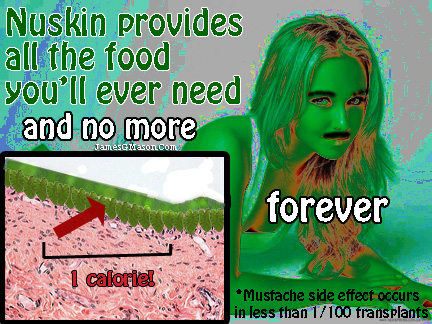 If necessity is the mother of invention then incorporating plant life into our own life in order to always eat is an idea that has surpassed its minimal requirement to be a necessity by leaps and bounds and must now become invention to save the world from hunger and death by starvation. I'll do the easy part. I have invented the concept in this article and I will name it:

We must invent it because we may never come close to feeding the entire world and terminating all that suffering using normal agricultural methods and this creation could do just that - eliminate hunger. We may for a very long time continue to have at least one billion people per day sleeping hungry every night somewhere on this planet. Hunger is the embarrassing emblem of humanity's continuing greatest failing. In just sixty years our population will double. We can not sustain ourselves at current population numbers, never mind how we'll do it when we are twelve billion mouths to feed on Earth.

Science looks inside of nature when seeking answers and answering the huge problem of not enough food has always been about how to grow enough food, transport enough food, get enough food to the right people. It's time to look at nature again but not so deeply, we need to look right on the top of Earth's surface in plain view at the process of photosynthesis for carbohydrate production, yes leaves, plant cells, but within us, part of us.

~~~~~
It is my fading hope that we humans may reach a day when we have collectively realized that compulsion toward profits should never be allowed to intermingle with health and safety and the welfare of all. At that time, we may begin to care for ourselves as one community. We may then be able to feed the world and perhaps feed 12 billion people every day.

However, I see that as unlikely, as the pattern of our behavior makes this possibility very unlikely, unless a radical change occurs. That change may be a painful lesson. As we humans will respond to great pain, where we lack the ability to empathize with our inevitable painful future. We live in denial of the horrors of the future.

This idea of incorporating plant life into our physiology is a way to avoid much suffering and great pain. We may not have to learn that lesson painfully. Science can help us to avoid this hard lesson. We can produce carbohydrate and nutrients, just as the plant life on this planet has been successful in doing since the time of the formation of eukaryotes. The single cellular, photosynthesizing, self-reproducing life forms who live on sun and the carbon in our atmosphere, charged with the electromagnetic energy of our parent star that sustains all life.

It's time to become plant people and deliver a world wide blow to all suffering that will never be forgotten. No longer could power be declared and be lost and no longer could wars be fought over the amount of food absent or present of any people in any land where the sun shines onto flesh.

The new tissue will feeds us the ends of it's tiny growing leaves into our bloodstreams. Tissue that of course would turn our skin a translucent green like the forests or the beautiful green lawns we surround ourselves with- purposefully.

We could provide our new skin its sustenance simply by swallowing plant fertilizer vitamins daily and making sure that we lay in, or work in, sunlight, or artificial sunlight for eight to twelve hours per day (for example). Who knows we may not have a need for green skin, perhaps science could control  the pigment gene for the new hybrid cell and we could all enjoy custom created skin tones that conduct photosynthesis and create carbohydrates and fiber for us to survive on for as long as we shall all live under the light of Sol.

And yes you geeks reading this, the photovoltaic energy created in photosynthesis would not go to waste either, a small device could harness our new skin cells' billions of microscopic power-plants and charge our smart phones and other low power interfaces, perhaps our internal devices, while we lay in the sun.

We'll need an enzyme producing white blood cell to produce the interior leaf eating enzymes so we can digest the plant matter growing in our flesh. Creation of specialized cells from stem cells takes a front in priority of research in this line of discovery. It will be amazing, but it won't be as difficult as much of the amazing accomplishments we have already made.

We want these conceptualized hybrid cells to last as long as a long living tree or large green plant would live, perhaps fifty to one hundred and fifty years. Low blood sugar and other biochemical events should engage a physiologic trigger which regulates the amount of leafy growth for the blood stream, in this way we are not over producing green leafy food when we do not need to. Scheduling dinner and having anxiety about locating food will never have to happen again.

We may not need the hybrid cells all over our bodies, perhaps just our hands and arms, or maybe even only our foreheads or scalps where the most light can reach for the most part of the day. Essentially the skin would have to produce enough leafy matter in our blood streams to amount to about two thousand calories per day.

I'm confident in human science that through collaborations of the best scientists, with someone creative pushing them who has confidence their goal, we could achieve the H/P hybrid tissue cell and end hunger on Earth. The hungry and the poor must get their implantations first and the anorexic western women and obese people of the world will have to wait.

The team of scientists who can make this breakthrough will be undeserving of our highest known award on Earth. We'll need to make a new award for these people. The honored and cherished Nobel prize given to brilliant discovers today will not be prestigious enough.

Create the hybrid human/plant epithelial cell and feed the world. I know the devil is in the details, but this issue is far too important to allow scientists to claim "stumped" over. It's a true necessity dammit! Now let's invent - for our priorities, like this concept does.