Knows No Internalization of Costs 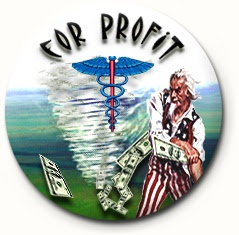 The Health Care industry knows no internalization of costs. Rather, no internal company sacrifice to deduct from profits, like nearly all other businesses in the United States, save for the oil industry. Under U.S. style corporate regulation, basically, if you the consumer have to have it for life and lifestyle, then you can bet on it, they the corporation will pass every penny of every new cost on to you, nice. Where is the equilibrium between us and them? What balances out the vacuum machine that is these types of businesses sucking relentlessly on our precious dollars? The balance we dream of is non existent without controls by government, a.k.a. us, we the people.

Good capitalism places checks and out-right restrictions on industries. Why?
1. To ensure the continued growth of all industries by:

Curbing anti-competitive behavior by any one corporation.
Preventing monopolization of resources.
Enforcing ethical labor standards across industries.
Enforcing and ensuring a fair and equitable internalization of costs of businesses.
2. Ensuring that workers are able to provide for themselves.
Instituting a Living Wage nationally.
Providing a nationalized health plan for all.
Provide for workers accident compensation, Social Security, individual pensions.
In Venezuela the Chavez government has taken control of the oil industry and provided a methodology for all of the people to benefit from every dollar of proceeds. Because oil lies deep under the people’s ground, in pools stretching for tens of miles, it can not be measured to belong to one man or one corporation. This is the thinking for the people from the Chavez governments plan and it works just fine. In the united states, in the 1880s when this very condition was argued in court, the rich mining companies won because they already had the drilling equipment, the political clout, and the riches needed to get started exploiting the under-earth. They became the Robber Barrons and the inequity they wrought with their predatory and ex-ploitative, dis-compassionate behaviors, brought us into an era of widespread poverty unmatched in U.S. history.
Lots of good sounding ideas to solve our health care problem (too expensive, too inaccessible to the poor, too extravagant) have been tossed out. Most fail to meet permanence of solution, just curbing some costs for some time. A Republican politician recently proposed his ideas be enacted if he is elected: “We need to educate the people! People need to know about calories from fat, soda and red meats, damage from alcohol. We need to inform aggressively about the dangers of smoking and inactivity and the benefits of exercise. Why diabetes alone, if reduced, could save us a billion a year! I predict that our health care industry could save up to %10 per year if these aggressive instructional measures are enacted.” Ten percent? Is he nuts? This year alone the cost of health care in America will increase by %12-%16 over the year before. That has been the rate of rising expense since the late nineteen eighties. Remember: There is no internalization of costs in either the health care industry or big-oil, no absorbtion of unwanted expenses, everything can be passed on to someone. But, how is a %10 health education program supposed to begin to overcome that? It won’t. The politician is lost. He is paying lip service politically to the naive who may vote for him. But more importantly he is protecting an army of CEOs and lobbyists he has come to know during the course of his carrier.

How do we regulate the health care industry for the protection of the people and the continuation of healthy capitalism? We barely do now , that’s the problem, that’s why I write on this subject. Why not? Political solicitation of a caliber which exceeds by far any type of access you or I could get to our representatives. There are approximately 40,000 lobbyists in Washington D.C. waiting to pounce in front of your interests, to circumvent you for a purely corporate interest.
What to do about it all? Begin with absolute public financing of every campaign and no exceptions for the wealthy. Free Television advertisements, where a television station uses the publicly owned airwaves.
Everything else follows the accomplishment of public financing. All fixes. All reforms. National living wage. National Health Care, or Medicare for All, a National Pharmaceutical Association which belongs to the people. Tough controls on multiple ownership of media, of natural resources consuming industries, of overseas exploitation of cheap and child labor.