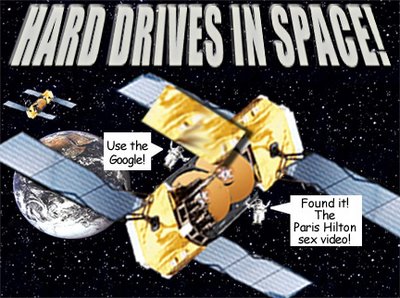 I would never re-post it if I did not think it relevant. More so than it was in 2006. Its a possibility. Its definitely needed. The technology is here.

Hard Drives in Space (announced with a large ambient echo) might be the ultimate in long term reliable data storage for the people. Behemoth satellites can be built with principle of design for duration, for capacity, for durability, and for access from any Earth bound users.

As we see our planet reach closer towards an ends, either by war violently, by viral plague, or catastrophic geologic and or climate change, we must consider our data and what is to be the fate of all that we have done digitally. What is to become of those novels on Microsoft Word, you worked so hard on. What about those two hundred family photos you would like to keep. How about all that email you have saved for ten years? What about that 30,000 image collection of women’s naked butts you spent years downloading in your office with the lights out? There is no need for the capacity in hard drives in space to be restricted to a certain few for example the military, and government, and for that reason Hard Drives in Space must be a combined government and private citizen’s endeavor.

The satellites (as vessels for protection, maintenance of orbit, and routing upload and download streams) must be high enough in orbit not to degrade and burn up, ever. The protection from meteors and meteorites and micro-meteors must be primary in the design. A steel triple hull of the type some modern oil tankers are now using would be adequate. Sophisticated security programs must police the integrity of everyone’s data for centuries to come, assuring users that their own data will never be deleted to make room for someone else’s. Several (perhaps six) should be built and launched in the same time period. But only one uploaded to working capacity at a time. A satellite over an opposite hemisphere should function as a replicate data copy for the first. A full drive can be moved into an even higher orbit, or even sent to a lunar orbit for added safety.

Again; Hard Drives in Space, is not necessarily for our selfish use, but primarily to preserve and pass-along human history, human endeavor, and human pictures of Janet Jackson’s right nipple and record of other time consuming totally hedonistic and voyeuristic activities. In the far future there will be archeologists roaming about Earth or traveling through this solar system called “Sol.” Perhaps they will be humans who’s ancestors originated from Earth. But we can assure that they do not just find a planet of water and dust, of crumpled ruins resembling piles of rock, and all metals turned to reddish brown piles of rust. We can assure they have access to all that was us, every thought a human of our time may have had, every pleasure, every disappointment and so on.

We can do this! Its very important for our whole race!
Posted by James Mason at 9:31 PM No comments: