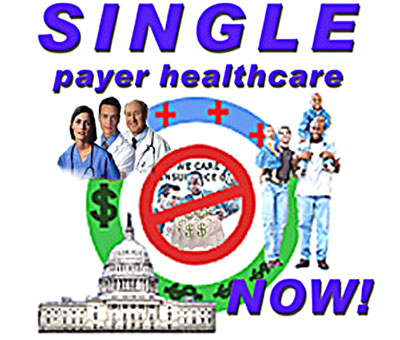 “Universal Healthcare,” are words on the table of national discussion again. Thank goodness. But with the words so come the multitudes of idiots who wish to push an agenda related to the issues, but whose sincerity is absent, as can be measured by the amazing illogical methodology they propose. Like George Bush’s proposal of taxing more the businesses that already can afford to contribute to the health insurance costs of their employees. Moron!

So with the parade begun, George W. Bush begins the politician show at the hospital, gathered in a small conference room with a chosen few white coats. He spouted his illogical proposals that favored protecting the tax dollars of his base (the rich). The anxious doctors and nurses, probably compelled to sit there while their children are held by Secret Service agents in an undisclosed location, pointed their ears, noses, and throats at the idiot with the clearly defined Fetal Alcohol Syndrome eye sockets and beady little dishonest rapidly dodging eyeballs.
Why in the hell do we (the mainstream public) have the impression that health care professionals, i.e. doctors and nurses, diagnosticians and so on, are qualified to give us a worthy opinion? Why especially do we rely on their perspectives on creating a social infrastructure change, so vast as initiating a universal health care system? I spent five years in Nursing. I worked in the one of the most elaborate for profit hospitals on the West Coast. I have spent hundreds of hours getting to know other Nurses, aides, doctors, and administrative staff. Their knowledge of health care politics and what is needed, or what is not, is so vastly deficient it can only be compared to knowledge by a recluse in a trailer home somewhere of Hollywood celebrity comings and goings. Next time you see a politician standing in front of a bunch of white coats with stethoscopes, keep this fact in mind, they are not the experts in health care reform! Far from it! They have filled their studious minds with important knowledge, but for them to begin to study for a solution to our deficient health care system would result in vastly bias answers.
Who are the real experts? The mother and father who lost their child a decade or more ago due to an insurance company that refused to pay for the procedure, a test, a piece of equipment. Or their child is lost due to a hospital or a surgical unit, that refused to begin the procedure without a guarantee of payment. That mother and father became experts on health care reform by little choice of their own. They studied with passion and determination to learn what went wrong, how to prevent it, how to permanently solve the problem for thousands of parents like them. The result of their study would result in bias too. But it would be the kind of bias we all would want, bias study that would result in solutions for all of us, doctors and nurses, politicians and tycoons.
If the republicans are going to take the health insurance issue and make it their own, you can bet that for profit insurance companies will be front and center in the plan, and capitation of services charges will be a taboo aspect that won’t even reach committee. The republicans will do anything to protect the cruel and capitalistic branch of human waste called the Insurance Company. States where for-profit h.m.o.’s have spread like a virus across the entire region, monopolizing all care but government funded clinics for the poor, will be protected by the republicans who will naturally decry “states rights!” Rather than allow a federal program to buy out facilities and infrastructure existing.

The new national health care plan must be fully socialized, treating all, disallowing the purchase of frills and extras or expedited service by the rich and impatient that live on the hill.
One of the first things that we the people need to get straight is some of the language. In the quest for a solution to the inadequate health services in our country, we must recognize the problem is money, not services, not technology, not research, not parking, not access other than the money. Money would solve all our health care problems. But not money alone. Money with caveats, and money with capitation, money that flows with ease and money that does not have to be seen or handled by the patient or patient’s family.
Instead of asking for “Universal healthcare.” We must be asking for Single Payer Healthcare. This describes the problem to be solved. The condition of favor (Universal Healthcare) is beside the point, a goal to aspire to, the ultimate status that may or may not ever happen. But “Single Payer . . “ describes the simplicity of the solution, and reminds us of the major problem of the past, i.e. multiple payers and multiple payees, cost sharing, employer contributions, and etcetera. The later, all conditions of confusion. A sticky web of payments and collection that allowed the consumer to get caught, without the ability to get free. With no middle man between you and your provider, there is but a “single payer,” needed to be your wallet, your health care bank. One organization to watch after, to be frequently audited, to report back to you, the citizenry. “A Single-payer.”

Instead of a discussion of “Health Insurance,” i.e. what to do about it, how to pay for it, how to dispense it, who gets a cut of it, we must only discuss “Health Care.” That is the problem, not insurance. Insurance is a profit scam, not a solution towards better health. Insurance costs, it’s a general negative, it invokes a concern in most, it invokes fear in others. Others who may be unable to pay for it, as 44 million Americans have been, or unable to pay for a proper amount to remain healthy, unable to receive a specific treatment because “Insurance,” says that you can not. “Health Care,” is what the entire reform movement is about and the insurance was one of the symptoms of the disease. Health care is what Americans only want, just good, care. Its affordability does not have to be a matter of concern for the great many citizens. Health Care is all that matters. The saying rings true in the quest for real reform: “If you’ve got your health, you’ve got everything.”
Expand Medicare to all U.S. citizens and foreign visitors. Outlaw the sale of health insurance by all insurance companies that are not the Medicare National Fund / the Peoples’ Insurance. Create an enforcement wing of Medicare to reign in over billing, over treatment, equipment scams, and pharmaceutical profit gouging.
Shift all for profit health insurance employees into the employment of the new expanded Medicare system. Any officer of a company or CEO, who earned more than a reasonable amount of annual salary and or bonus on the backs of the sick and desperate, can hit the highway, and perhaps sell Amway. We won’t want their kind in a new inclusive people run system.

Visit SiCKOCure.org to learn more and become a part of the struggle for real universal health care.
Posted by James Mason at 10:17 AM No comments: