Stop the Beef Madness for All Our Sake! 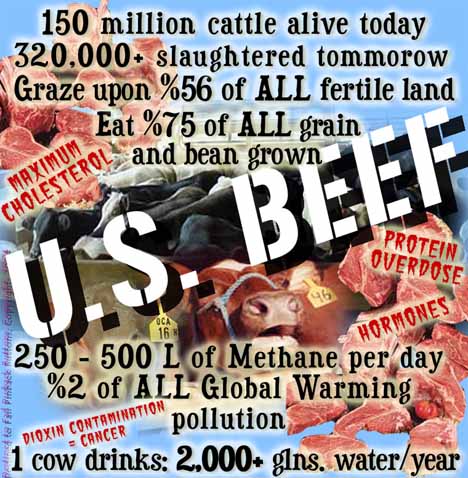 We need to begin to treat beef as a luxury food, for our health, for the environment and for the sake of providing more food for the rest of the world, healthy food derived from the resources previously used by an out of control cattle and beef industry. We need to eat our beef as often as a meal of a large lobster for the average coastal dwelling human. It needs to be expensive and rare in our diets for all our sakes.


Beef needs to be rare and expensive because we are feedings millions of tons of food and water into the most over harvested animal on the planet. An animal that is a glutton of vegetation and feed, and a destroyer of land under it's hoofs, and is a polluter of our air, gives fatty deposits to arteries and hearts of those who eat it. Beef cattle raising and slaughter is the most wasteful and inefficient method of food harvesting the planet has ever known. 53% of all of the meat we eat is beef. We are keeping alive more than 80 million cattle on any given day in the Unites States. We are slaughtering at least 93 thousand cattle daily, 33 million annually in the U.S.. We sell $79 billion in beef annually, some of that internationally, which costs us $56 billion annually to produce, not a great return especially considering the great many unaccountable costs of detriment and loss to people and environment from it's consumption. Per capita (each of us as a division of the population) we will spend $261.90 on beef, which is 53% of all spending on meat. A cow will excrete up to 286 lbs of methane gas per year, or 9.6 fluid ounces of pure methane - a carbon emission contributing to global climate change. The National Academy of Sciences estimates that world-wide live cattle contribute to nearly 5% of all greenhouse gas climate changing pollutant. Millions of acres of oxygen creating forest (that ironically could process much of that pollutant) have been cut-down around the world to make room for grazing herds of cattle. A herd of cattle, 44 head on average, can destroy an acre of fertile vegetative land in one week, by trampling and destroying soil and vegetation under hoof (300-500 lb/sq. in. per hoof), and by poisoning top-soil with thousands of gallons of salty urine, making further growth for growing food or for grazing cattle impossible for many years on that acre. To raise between 3 and 5 head of cattle foraging/grazing on native vegetation, a rancher requires 5 fertile acres to be sacrificed for his return, for our return of thousands of cheeseburgers for instance. Two large rural African villages could eat heartily from the crops of five acres.
Thanks to hormone, steroid, and breeding sciences we have created larger cattle with our manipulations, but that has only made matters worse incrementally and efficiency gained for that effort is negligible. A cow yielded on average 449 lbs of production meat in 1980. That cow now yields 632 lbs. in 2009. But in terms of output verses input and environmental destruction, that larger cow makes no difference, is not an efficiency, just a big steroid filled, genetically manipulated larger hunk of meat with more bone problems. It still must be grain fed (most cattle are grain fed manually), and it's water supplied at it's new 2009 size. What we do get is nine year old girls growing breasts, and many more 7 foot tall basketball players, and many other maladies and abnormalities including puberty and reproduction malformations, and cholesterol levels nation wide that if combined could fill a large lake with pure fat. Today's new cattle will consume over 2,000 gallons of water per year each on average. For comparison humans only need to consume 182 gallons of water annually. Cattle will consume up to 2.5% of their body weight in dry grain per day. In human comparison that would be like us eating almost 4 lbs of dry food per day or over 10 lbs. of wet food. We consider our selves efficient processors of food and water - why raise an animal to eat which is multiple times more grossly inefficient as compared to our needs?

The land occupied and destroyed by grazing, and occupied by corn, barely, oat, and soy to feed most of the grain eating cattle, can be far better utilized for grain, fruits and vegetables enough to feed the humans of rest of the world. If you must eat beef, eat it infrequently, as a luxury food.  Remember, as you chomp through that fatty delicious burger, that meat and the being it once belonged to, once had feeling and emotion no different from your own.

We need to consider the feelings of these animals. All mammals possess a cerebral cortex, the cow is no different. Our large cortex allows more cognition, and so more emotion as a result of that cognition. There in the thinner cortex of the cows each processes enough cortex so that cognitively what they see and experience through senses, results in emotion, causing them to act, if they can. Emotion often expressed as familial behavior, love for their calves not unlike our love for our children, loyalty to others in the herd, emotional breakdown when seeing loss and stress of others near them. We ignore that these are emotion filled animals. Ask any farm raised child if his cows, his goats, have ever had an emotional attachment to him or her, and the answer is always "yes definitely." Many a family has made "Clarabelle" the family cow, their pet and keep it alive and share in affection for it, and even receive return affections, wanting for human touch and company from the humans. These are the beings we are destroying the lives of every day. We bring them into the world to raise and eat. They experience the emotions of loss of their young, deaths of others, illness of other cattle, danger to the herd and so on. They are hugely emotion experiencing animals. Like our pet dogs and cats. Yet we'll slaughter more than 93,000 of them today, for cheeseburgers with lettuce and tomato.

News Flash: September 11, 2014. McDonalds has announced "across all regions in August, the fifth monthly drop since July 2012."  http://www.nytimes.com/2014/09/10/business/mcdonalds-sales-dip-globally-china-scandal-will-hurt-profit.html?module=Search&mabReward=relbias%3Ar


Acres of land occupied by cattle: 2 -5 full sized cows raised to harvest size on 5 acres seems to be the consensus on forums. https://www.localharvest.org/forum/thread.jsp?forum=6&thread=461

http://wiki.answers.com/Q/How_much_methane_does_a_cow_produce "Methane emissions per animal from this assessment are comparable to figures
obtained by Schils et al. (2007b), Cederberg et al. (2009) in OECD countries (ranging from 110 to 130 kg methane per cow per year) and by Herrero et al. (2008) in Africa (ranging between 21 and 40 kg methane per livestock unit per year)."


Beef Cattleman's Assoc. http://www.beefusa.org/CMDocs/BeefUSA/Resources/Statistics/annualcattlenumbersandbeefproduction774.pdf
From Beefusa.org Cattlemen's assoc
http://www.beefusa.org/beefindustrystatistics.aspx
80 million alive today in the USA alone.  some 27 million are feeder calves.
Average $500 grain per year each.
53% of all meat eaten is beef each year.
33.5 million head harvested, 26 billion pounds of beef harvested under usda inspection. Would mean that we are slaughtering 93 thousand head per day.
Total cost per year $55 billion of livestock.
$79 Billion processed in USA annually