Complaining About Obamacare is Ignorance of United States Healthcare 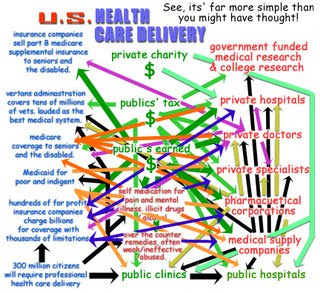 1996: What it looked like and what it still looks like. Except the ACA removed many of these lines and then allowed affordable health insurance for 17 million people, many who never had it before and more to come still. I made this abstract collage in 1996. If defines only in abstract what our current system still looks like. The ACA was an attempt to use what we had without greatly upsetting conservatives in our country and so maybe get a standard passed that insured millions and curbed the amazingly rising annual costs of delivery and health insurance premiums and also allow us to become more moral as a society.


Two questions that most Americans will still answer incorrectly based on their vast ignorance of what our so called “health care system,” in the United States was and what it mostly remains today despite the revolutionary changes made in the Affordable Care Act:

What is more economically more efficient and delivers better health care delivery to the most people at once?

Here is another question that most will get wrong based upon the psychology of denial:

Who would do a better job at economic efficiency and changes in health care financing and delivery to the most people at once?

If you hear someone complain about any aspect or any detail of current healthcare provided and blame it as the fault of “Obama Care” please ask them, “How was that particular situation before the Affordable Healthcare Act?” They won’t have an answer. They did not know how bad it was. They are learning just now of what they dislike.

I predict that in 9 out of 10 of those complaints that that person will have no idea how that problem, or the problem that that aspect of delivery attempts to repair, was prior to the ACA. This a sure prediction because it seems very much that as we now scrutinize our health care delivery and payments in this country we do so with a new awareness, not an old awareness.

Those details of a vast and very confusing healthcare payment and delivery system (if calling was what before a “system” is even merited) are what most of this community is learning about now, at this time, after the ACA has been passed is new to a great many who cared not for understanding the mess that we had.

It was passed with no conservative support in this country as the best attempt liberals in this community could make to correct a tangled mishmash of disorder that was costing everyone of us an out of control fortune in precious life-saving money that we (liberals) knew could be better spent.

The healthcare system was out of control and costs knew no ceiling and tens of millions of people in our community had no access to even visit a doctor’s office. It was so out control that all of in my community the United States could expect that all health care costs would be at least 12% more expensive in the following year. It was an economic monster by any definition. It was literally killing us.

We had plenty of true systems to look at all over the world, but the conservatives among us thought that we were too different. Too good to learn from others. They thought that our so-called system was wonderful.

It was the profits. It was greed and bottom dollar corporate healthcare industry out of control. It was the cost of doing business or so we accepted it as. We were ignorant and we were all naive. It felt better to be blind to the complexity of a very confused “system.” Barely one conservative representative in this nation knew about those complexities. Barely one of them thought it was “a mess.” They would say things like “the best healthcare system in the world.” They were as children not wanting any change. They had the best healthcare system in the world: it was Congressional healthcare, it was a fast trip to Bethesda Naval Hospital or Walter Reed Army Hospital to be cared for by multiple doctors and nurses and get the best diagnostic technology within an hour of any complaint. They saw what they thought was our healthcare and so postponed making changes that would have saved the lives and the suffering of millions of Americans.

Now they complain the loudest when change is before them. They are the conservatives. A label for a political opinion that dislikes changes that favors the blissful state of ignorance of avoiding complexity and so maintaining a status quo. They think in naivety that the change should be easy. They  remain blissfully ignorant. The conservatives in the United States have no better solution for the mess that they allowed to grow and fester for decades.

In 1994, I fought for a Single Payer healthcare system for the state of California. The industry steeped in money spent over $72 million to defeat the initiative and won. Californians lost-out on a great chance to show the rest of this country what could be. Here we are 20 years later and we finally have the first glimmer of a national program and we are hearing the voice of the ignorant who hate change once again. Now they want to repeal the ACA and “fix it,” but they have not a good plan to do so. They have learned what the dislike about changes that are really only the beginning.

There will be a unified and national program for providing our healthcare to a standard that surpasses all known standards of healthcare delivery and financing and payment known in the world. I know this because I have seen what the United States is capable of. I still have optimism we can do this after the all the ignorance and greed and disdain for changes that I have witnessed.

We will likely call it “Medicare for All.” It will be an evolution of “Obama Care.” It will be the inevitable. Change is always wrought with complexities that often involve trial and error learning by large societies. If there was ever a change that we all had to bravely direct ourselves toward, in all the pain and through all the complaining, it is our healthcare financing and delivery “system.” We will one day be able to call it a genuine system of healthcare.

We will choose the current operations of the Medicare Insurance program because it already exists and provides health care financing and so the distribution of healthcare for over 73 million of us. So it makes sense that we should use it to be the most efficient method of financing and delivery of something every man and woman and child in our community will need through their whole lives.

The next complaint you hear may come from someone who works closely with the complexities of management. They will likely blame it on “Obama Care.” It is the pain of doing what should have been done decades ago. It is the frustration with having change forced upon them. No one like changes that make us do work and causes us to be critical. That is human behavior. That is predictable.

Image: I made this abstract collage in 1995. If defines only in abstract what our current system still looks like. The ACA was an attempt to use what we had without greatly upsetting conservatives in our country and so maybe get a standard passed.


Here are a few other images from that battle decades ago to begin the changes needed to save lives and prevent much of the suffering we have been going through since that time: 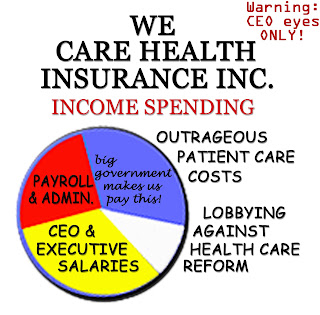 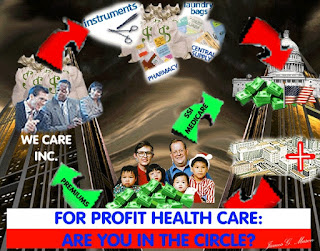 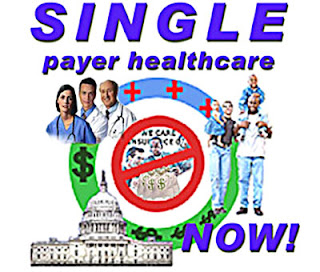