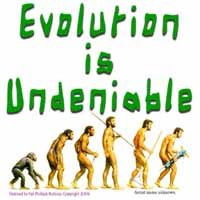 Evolution theory (yes it’s a theory, which means it’s been tested and retested, and peer reviewed and peer accepted) states that all life on Earth arose from a circumstance of need for survival and need to proliferate.

Generally this change due to a need to proliferate, and synonymously to survive, is called “Natural Selection.” Natural as in: happened in nature, or happened with an effort of naturally cooperative materials, i.e. life forms, and energies. Selection as in: to chose and keep, to make one’s own, to incorporate a part or in whole an addition. “Natural selection,” is a process that is chief in understanding Darwin’s evolution.

The spiked and bristled weed grows in the forest. Insects leave it alone, unable to eat of it’s topsides due to the inhospitable climb to the top. The weed proliferates, its species surviving. Did God give it bristles? Preferring to save the pollen on top for the bees? No, a mutation occurred (like a third arm or a Siamese twin) that proved advantageous to the weed, proved necessary.

Creationists dismiss evolution’s merit due to the unlikely “chance of random events creating such complex structures in life!”

Very little about evolution is dependent upon a random “falling” or “bumping into” of one structure of life upon another. It’s not about random it’s about necessity.

A junkyard sits in the path of tornado velocity wind storms. The idiot who put the junkyard there is no where to be seen. Along comes the fierce winds and lifts every piece of metal up into the air, twists them all around, and drops it all on the ground where it originated. A pile of randomized, chaotic, junk is what’s left. Then imagine the winds come back five hundred times. Now we have something, not a Timex watch the size of a house, but a sturdy metallic windproof junk pile. Environment can cause life to form complex structures towards better survival and more procreation.

If we evolved from apes, then why are the apes still here? Simple, we didn’t evolve from them, we created an evolutionary branch. Most likely the branch is the result of many mutations which favored the species before it, but presupposed an advantage for the species ahead, us homo-sapiens.

If water is wet on the other side of this universe, which it very very likely is, then evolution is a process in place in millions of forms of evolution on the other side of the universe, and everywhere in the universe. In fact examination of stars and galaxies indicates that the entire universe is life form in an ongoing process of evolution. Praise be science and evolution!
Posted by James Mason at 3:16 PM No comments: