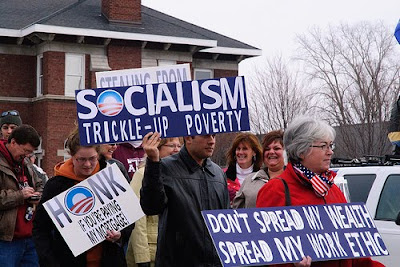 A true conservative in the modern United States favors eliminating all rules and regulations on businesses, privatizing our school systems, tolling our roads and highways, enacting a flat tax system, fully privatizing medical delivery and leaving assistance to the poor entirely up to private charity. A true socialist democratic citizen is optimistic about our collective ability to solve problems after laissez-faire methods have failed; such is the case with health care reform and the rather socialist idea of a publicly owned and operated not-for-profit health insurance company.
Posted by James Mason at 7:52 AM No comments: