Out of Room – We Should Dump on the Moon! 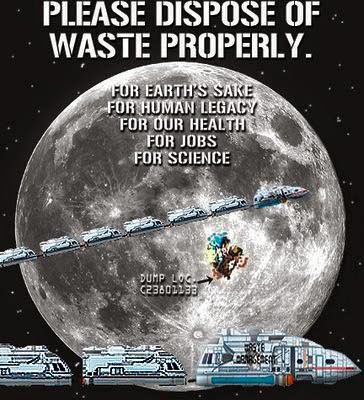 It's reasonable to expect that one day we'll be up to our necks in garbage and desperate to put our waste somewhere else. Naturally we’ll want that somewhere to be “not in my backyard,” and that category will one day soon cover the entire planet. We’ll want the somewhere to be where our waste will never harm any living thing, as it has many of us over the many years. We may want to remove the waste we have already dumped and add it to the export. Its inevitable; burying what’s left of our garbage after recycling will no longer be an option sooner than we might think. On average each American uses 4.5 pounds of waste per day. Our nation buries 229 MILLION pounds of garbage per year (each of these rates only increase – where recycling has only slowed the rate, the problem sill grows). This is only the “municipal waste,” a.k.a. the stuff you put in a can at your curbside, which only represents about %20 of the entire flow all waste materials in the U.S. per year. Exporting and importing waste has become practically a trading commodity by governors and state waste commissioners. New York toped the list recently with 4.5 million tons shipped out, on trains, and on barges.

The raw human energy and the carbon monoxide smog, and the fossil fuel involved in disposal of all of the waste in our country is immeasurable, but be assured, this would be a huge and troubling number. Another immeasurable consideration is the workers, faced with the ill health effects of spending forty hours per week breathing in everything from carcinogens released from industrial and household containers, to large amounts of methane, and petrol carbons from the vehicles they work on or near.

What do we humans do? We are literally piling our problems and sweeping them under the rug of the Earth. Do we all start wearing artificial lungs on our backs? Do we convert our largest landfills into ski slopes, fall-out shelters, hang gliding launches? Sure, in the interim, that’ll be fun. But a long term solution is needed:

There it is above us. The Moon, or “our moon.” Staring us in the face. That gray and lifeless chunk of rock that may have broken off from our planet a billion years ago. Radioactive. Without atmosphere. Too hot in the sun. Way too cold on the dark side. Any dessert landscape on Earth is more attractive to look at , than this moonscape of shades of grayness. If we were one day to establish a moon colony, complete with residential homes (or survival bubbles?), the families residing there would go nuts and kill each other or leave within months, having realized their big mistake. It might be a good place for a giant Death Ray to protect us from Socialists and alien invaders from the planet Mexico (formerly Mars). The point is made that the moon isn’t worth much in a non science fiction context.

Let us send our waste there. All of our waste there. Lets use the waste up there, to begin a hydrogen atmosphere, largely of methane, and unbreathable matter, but in the future the possibility could exists that this atmosphere could be altered and repaired, and sustain life, plants only at first. (scientific advancements will be flying off the shelves during and after having achieved the moon-waste project).

We would build and design an efficient launch to get our waste into space. Perhaps a tether and elevator system between a low orbit space station to reach shuttles that would be docked and waiting loading. On inauguration day we can ship Rush Limbaugh to begin the new waste pile. A single burst of fuel can send a shuttle on its way to moon orbit within days. The dumping shuttle would be remote controlled by a waste manager’s station on the surface.
The garbage would be dumped strategically to form an artistic pattern to display back towards Earth. A resident artist will reside at the moon manager’s station to direct the art-work. Several artists will win a chance to reside and to contribute their vision over the course of more than two generations. This artistic creation will have been one of the large selling points to the people of Earth that will have paid for the project. The finished canvas of color by design will face the people of Earth for nearly eternity. It will be a reminder of this first generation, to thousands of generations to come, of those who first chose to dump their garbage on the moon and recreate its surface into something magnificent, efficient, and beautiful.
Posted by James Mason at 9:01 AM No comments: