After Bush, Trump and Brexit it's a good time to discuss an idea that's time may have come.

#VOTERTESTING, let that ring uncomfortable until you get used to the idea.

It is consistent with democracy and improving its trustworthiness.

We can all read.

#VOTERTESTING, let that ring uncomfortable until you get used to the idea.

Consistent with democracy and improving its trustworthiness.

We can all read.

An informed voter is necessary to the effectiveness and stability of any #democracy, or they fall apart.

They collapse from ignorant hordes. 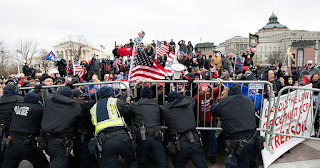 Hordes of the poorly informed incited by the most ignorant
president in US history, on January 6th 2021. 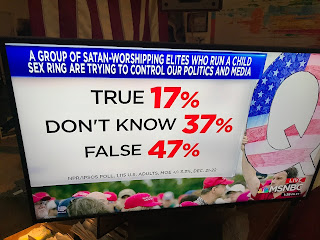 We abused the First Amendment, we lost control of truth.

The challenging future will require a reliable body of esteemed tested voters, not millions too busy to understand the complexities of issues.

After Bush, Trump, and Brexit, it's an excellent time to discuss an idea that's time must come.

Because, the low information voter does not have to be here-to-stay. Let them get on with their lives, that are apparently more important than giving thought time to serious issues of the day.

Notes and what knots:

If the nation had voter testing, of history, civics and current events, to become eligible, the numbers would be no less small, and they'd be knowledgeable voters that can't be fooled.

Having a pool of tested voters is a needed next tier of representation.

It is not like there won't be a lot of voters, all representing all needs of all people.

We want the tests to be welcoming and passable. It's who the voter is that's important. Someone who cares enough to keep-up and know their civics, history, and current events. 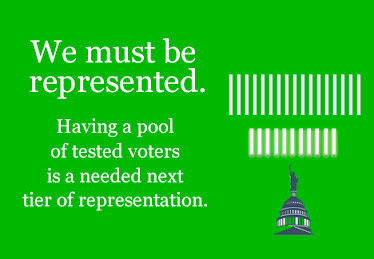 Imagine that after voter testing is normal to register to vote, that 20% of today’s numbers will be participating at that time, but that those numbers will be persistent or greater. Testing is not designed to fail participants. The great majority should be able to pass the voter test. What citizens need are those who want to be part of democracy. 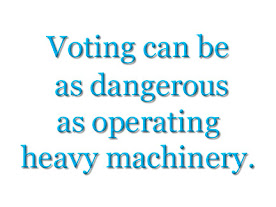 If we #TestVoters, we will more likely have an electorate who know the truth of current events, history, and civics.

They could be counted on as a consistent number who would vote in a natural disaster.

#Voting is a regulated privilege of those who participate in #democracy and is not a "right."

If we #TestVoters, we will more likely have an electorate who know the truth of current events, history, and civics, as they would be naturally curious information readers.

They could be counted on as a consistent number of voters who will vote in a natural disaster.

Don't confuse rights with your privilege to vote; i.e. you cannot be discriminated against in the process for reasons of race or sex.

A tested voter should get free stuff from city and state governments and a lot of local discounts.

They should get an annual check from the IRS, of $100. Keeps the numbers of them higher.

Vote, at the time you test to vote, after you've passed your test.
Trusting The News Today;

With misinformation widely allowed, #voting can be as dangerous as driving a heavy vehicle in a city. If you don't have proper knowledge and ability you are probably going to hurt yourself and others, and be costly.

Voter testing locations should all have great catering with booze. After all, testers are registered voters are honored citizens.

In the future, an answer is advocacy for creation of #VoterTesting, for all lovers of country who keep up w/truth, to have the privilege of running democracy.

You could be sure an apocalyptic event would not stop a tested voter from reaching the polling place or voting online or by mail. By taking the test and passing to become eligible, they have shown great enthusiasm for participation.

Here’s an idea, in conjunction with testing, voting at the time of the test; you choose your candidates and other choices, and then you proceed to take the test. You place your test into a Scantron form that can quickly give you your result, and if you pass the test, your vote gets registered.

In my State there were 248K citizens who voted in a recent primary, of 2.2M eligible (old enough) voters.

While the nation waits for thousands of polling places and assembly of millions of mail-in ballots, published exit polls, inferring winners and losers, will inspire great anxiety, and outbreaks of violence and riots.

Test to vote concept creates a reliable pool of active voters, must like jurists are selected and maintained for trials.

The division of both truth and political bent will be here to stay in societies with freely published media; news distributions outlets that can't be taken away, and can allow biases affect their presentation of truth.

We have abused the Frist Amendment.

We have feared regulating our information.

We must see the necessity of maintaining a fully informed electorate as important as keeping a standing army.

If we #TestVoters, we will more likely have an electorate who know the truth of current events, history, and civics, as naturally curious information readers.

Less likely will be millions of misdirected voters, as we see today, everywhere.

I would include voter testing clause within Amendment 28, Public Campaign Financing.

I want every voter to be proud and feel honored, and not to have the feeling of a granted right, that can be un-appreciated in its use, sometimes far too casually "Let's give him a try, why not!?" Laze-fare voter participation.

We use democracy to run the testing component of voter registration.

A council of elected, term serving elders and their staff keep track of the truth, and agree on all test questions. They are accountable. Not like Fox News.

Below; pardon my humor, but you get the point. 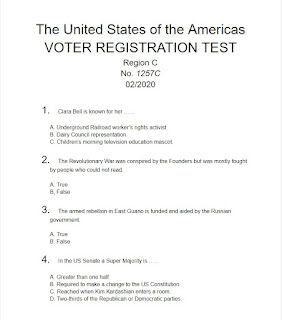