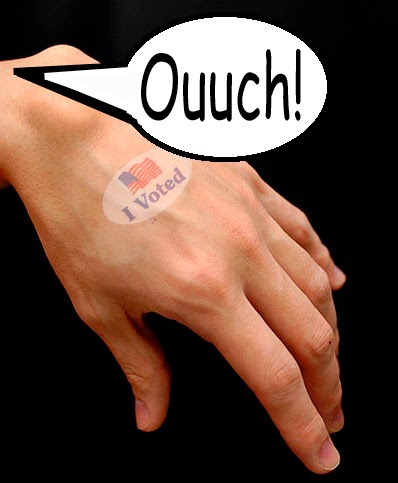 On this issue republicans are paranoid about liberals or immigrants voting illegally or voting twice or more times even though hardly anyone in any election year is discovered to have done this. Democrats and liberals voice outrage at the thought of making voting more difficult for anyone, they in fact want much more liberal voting access like weekend voting, voting from home and etcetera because they want better representation that includes the riff-raff in addition to the common electorate.

It's not necessary for this computer solution to know the identification of the voter. That the voter is standing there feeling entitled to vote and wanting to vote gets him or her to the finger print scanner and then on to the voting booth. The computer only rapidly determines it's a new finger print for that day/voting period, then the voter is allowed to go on to the booth. No worries about paid voters, so what? No worries about double or triple voters, or voters who cross county and state lines, or who have multiple residences.

To seal the deal we have a portable tattoo machine at the polling place which tattoos in henna (temporary) an "I voted" tattoo with an American flag, across the top of the voters' hand, which doubly ensures that voter can't even approach another polling place and try to vote again.

A pill which allows you to time waste evacuations including flatulence timing. You could set get a prescription for five urinations per day, two defecations, three farts at , two and and etc.. The body and the bladder might just adapt to expect the seven-thirty a.m. defecation, preceded by the seven-twenty seven a.m. flatulation which warns you to head toward the bathroom. They might be capsules with micro electronics within, manipulating the tissues of our bowels, controlling our gas levels and making it smell good, regulating water uptake, regulating our bacterial levels, adjusting the filtration rates and density of our kidneys.

The list goes on infinitively as medical science gets more and more technological and micro becomes super micro and before we know we will be living symbiotically with a microscopically small artificially intelligent biomedical submarine inside us all for all of our lives. We'll be impregnable to all virus and bacteria. Our flesh wounds will repair completely within minutes or hours. We'll receive arterial bypasses and not realize it when in danger.

Six miles from the coast is the fishing limit. "This is like a desert out here. The real fishing is nine or twelve miles out at least." Gazan fisherman, Al Jazeera Television, September, 2014.  "We can't condone that this restricted fishing zone is devoid of fish or that just telling a fisherman he can't have free access to the sea."

The justifiable fear of the Israeli government is that their enemies will smuggle arms and soldiers, and move passengers and contraband in and out of from the sea, if the area to be policed is large enough for the enemy to get away with it. Additionally a fishing boat manned by a crew of one or two or three has a typical profile on the water if it is Gazan, about fifteen feet, low in the water, and without an enclosed helm or cabins. Hence the six mile limit allows a limited number of Israeli gun boats to do the job. And if fishing is what is allowed, the boats being patrolled by will be less suspect overall.

The Israelis have the electronic tracking and optics technology at their disposal to allow fisherman free access to the western Mediterranean right now if they cared to use creative methods to enhance the freedom of Palestinians. Their boats could become registered and licensed and fitted with a transponder which by radio transmission continually designates them as an inspected and currently licensed fishing vessel and the transponder could alarm both the fisherman and the government if the boat strays too far, like into Egyptian or Lebanese waters, or fifty miles out perhaps.

A licensed vessel could fly a large bright green flag (for example) to indicate to all other sea traffic they are approved and monitored by the government. This would serve to protect fisherman from aggression of others. The flag should be a box kite so that it has a visible profile from satellite optics.

One man could inspect Gazan fishing boats seeing several a day from town to town. Three technicians could install the transponders. If two hundred boat transponders are needed that would cost less than the cost of one missile from the Israeli iron shield missile launchers. One person could sit and monitor all vessels at one desk looking at one monitor. This frees the Israeli navy from inspection of small boats throughout their patrol area. It greatly restricts the ability of smugglers and pirates to behave as fishing boats and causes them to be vessels without transponders for the navy to give their attention to.

Those Israelis interested in elevating the quality of the lives of the Gazans might consider a couple of fish finding ships for the Gazan fishing waters. Advanced sonar displayed on the internet can give the fisherman of both and great advantage. The crews could use wi-fi buoys to communicate location updates live so Gazans can have the largest fishing bounty possible on their tables.

When Does the Smelling Society Begin?

When is Apple introducing the smelling and odor dispensing iphone? The possibilities are numerous if they do. The gaseous vapor it may emit on demand or automatically will have to come from an outside source, like a tank of liquid attached to the phone. The smells it dispenses may need to be restricted, for example you don't want to get a police dog all excited because something you pushed on your iphone smelled like explosives, or a French poodle, or it's masters treats. Hunters could bait any tree or any spot they wanted with sexual odors or food odors to deceive animals. The technology on the iphone could smell with sniffability better than a hunting dog's ability. Enabling users to find lost pets by direction quickly. Find loved ones, who each will have a their personal smell stored in their favorites folder on the iphone smell catalog, available at itunes sniff. Ten year old boys of course will have more farts than they could imagine in their wildest dreams if they have the phone. Out in the wilderness or even out on the ocean, the smell of a hiking party or the smell of a small yacht can be located with a sniffer app on your phone. If you're the lost party, emit a smell that will cause vicious animals to run away, or make a stink your rescuers will later wish you didn't. We could have our phones tell us the ingredients in any food we're considering eating. If the food is laced with poison or turned foul or has dangerous bacteria on it, the phone will tell us. The phone could detect hormonal changes and perspiration and identify individual's personal perspiration. We would know when a woman is having menses, or near it or after it. The phone may even be able to detect pregnancy, cancer, lukemia, drugs, alcohol, poor hygiene, bad breath, a rotting tooth, the contents of the breathers last meal.