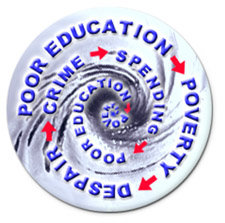 This image portrays a well documented social concept in metaphor, as a constantly churning cycle that feeds a liquid spiral of our population down into a dark pit at the bottom of an unstoppable whirlpool of socio-economic despair that continues as if a function of nature. I made this image more than 15 years ago and this cycle remains today and it must be broken. But few in our busy society have taken the time to understand it is representing a causality in reason that can be addressed.


The graphic metaphor in summary: In a wealthy society that has resources enough but does not recognize the best use of those resources, if large numbers of children receive a poor education they will very likely live a life of poverty and be unable to earn enough in any given year to escape the many facets of life that lead to a feeling of desperation as the ever constant emotion of despair. In their despair, many will turn to dishonesty as crime to cheat the life they are disgusted with living and cannot see a reasonable and viable methodology of escaping. Impulsively, society will then spend a great deal of money locking them up. That spending becomes the liquid that pulls by gravity with equal force as the momentum of crime behind it pushes it along. That money is lost and can not be used to address the causality of that crime that is the inevitable result of poor education. Poor education continues. They spiral persists. Poverty follows.


It was a lack of formal and public education that in 1787 was not seen by our supposedly brilliant “founders,” as being necessary for the security of a free state of free people. It was decades before the first cities in the new United States chose to publicly fund a school system. It was longer than a century before we recognized that African Americans must have a legally enforced right to that education as well. We still suffer because of this lack of foresight by privileged landowners, and slave owners who had very economic reasons for wanting us to be free.


In this graphic there are two metaphors of two entwined concepts: it is only our perspective from a distance (a stand-off position) that causes the center of the spiral to appear to be smaller. That small size is the size of the issue to the general population. That small size is also a cause of our segregation of those caught in the spiral away from our better functioning members of society. If a society were a person it might say:


“If it appears small we won’t have to face it. We won’t feel constantly guilty for our inability to share the opportunity of education with all as equals.”


A liberal in the United States of America knows of this whirlpool. A liberal knows that it begins with a poor educational system that does not favor equality of opportunity for every single citizen child in our country. Too many of the wealthy deny it exists.

If we want to see a good example of the demographic of who those people are, then we not look any further than at the audience of angry people who feel they should support the empty rhetorical campaign for president of the United States of America of billionaire real estate mogul Donald J. Trump.
There are millions of Donald Trump supporters who, if locked inside of a room with a well informed liberal activist and so forced to listen to the explanations of this metaphor would eventually understand this well-documented concept. They won’t like that they are listening to bleeding heart liberal but they would eventually agree that this spiral begins with education.


Donald J. Trump got a great education even though for most of the years of his primary education he treated those years as if that education could be forsaken as if it were a natural part of life.


But it was a natural part of life for the spoiled brats of the greedy land owners and landlords living in white male metropolis privilege clicks, as was the environment that Donald Trump’s father was living in while he became a millionaire in the 1950’s.


In this context, it is no coincidence that the majority of Trump supporters do not have higher education. It fits the pattern of this metaphor and it fits that Donald Trump would deny this causality as one of the privileged participants of a forsaken as an expectation of life, higher educational system.
What is Donald Trump’s answer to stopping this whirlpool? It does not exist. He would deny that this very liberal metaphor is a causality of the very anger that the minions who are enthused by his reasonless campaign for president of the United States express with shouts and yelling of vitriol at the many public campaign events he has held.


Readers: If you know a Trump supporter try to get them into that room and lock the door behind you. Appeal to their anger. Let them know you understand how they feel before explaining your opinion of why they feel the way they do.

They are hard working people. They each know someone who is either vastly underemployed or still unemployed from the near depression we suffered beginning in the Bush year of 2007. Empathize with them first. Maintain that empathy during the expression of your opinion as to why they have that anger. Let them know some facts like the fact that immigration into the United States has turned around. That the rich have been getting richer for decades while people like they are have continued to grow poorer. If you have read this far into this essay, you know what to say because you were already an informed liberal with empathy and understanding of causality of our whirlpool of despair.


By James Gray Mason for End All Suffering.