Why a Fair Tax is Flat on it's Face 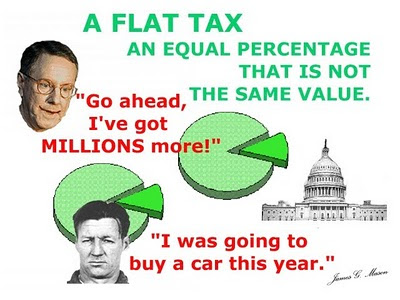 No matter your economic status when someone says the word “taxes” a few thoughts inevitably occur at the speed of light: “my money I’ll never see again,” followed by “it’s not fair” followed by “wouldn’t it be great if I could keep it all.”

Under current “Progressive” taxation, wealthier folks pay a greater percentage of their income to taxes (or a larger slice/fraction of their own pie) then the poor who pay a smaller slice of their pie and receive in turn the same level of government services. “Regressive” taxation works backwards from progressive taxation in that the poor pay the same slice of pie that the wealthy do, and the wealthy enjoy the same level of government services.

There has existed for more than a decade a proposal called the Fair Tax. It basically imagines a large “flat” sales tax on retail goods and services. The Fair Tax proposal says that instead of paying federal income taxes everyone should have to pay $23 out of every $100 at the state level, except (in progressive fashion) the poor, who earn less than or near the federally established poverty level, would get a monthly rebate which represents the personal value of their spending on needed goods.

The bait for support of the proposal is a plethora of goodies: it forecasts the elimination of all federal taxation, no more capital gains taxes, the end of tax shelters, closure of the IRS, a simple tax form, a repeal of the 16th amendment to the constitution. The proposal imagines that already in place state tax authorities would administer the Fair Tax. To emphasize simplicity one republican congressperson compared the size of a Fair Tax bill, which was initially 133 pages, to the 3 foot high stack of federal tax code currently in place which could be trashed under a Fair Tax.

Who favors the Fair Tax? The term "fair" is subjective, the name of the plan has been criticized as deceptive by liberals and claimed accurate by many conservatives. The proposal was first introduced in 1999 by Republicans, but the bill and several successive attempts have never made it out of committee. The newly organized right-wing group that call themselves the Tea Party favor the Fair Tax. Many of them listen to a conservative charismatic loud and sometimes obnoxious radio talk show host named Neil Boortz, who frequently touts the Fair Tax on the air nationwide, and has written a book called The Fair Tax Book. The website Fairtax.org states that the proposal has hundreds of thousands perhaps millions of supporters including less than 80 U.S. economists.

What is wrong with the Fair Tax? In a regressive manner struggling middle income families won’t have exemptions yet wont be wealthy either so their taxable slice of the pie will be the same as the wealthy. Even with the rebate exemption for the poor who are earning under or near the federally established poverty line, the question remains; is it fair that a middle income person pays the same slice of his or her pie as the wealthy person? The price of consumer goods will rise by 23%, the greatest rate of inflation ever known. This inflation will likely reduce the rate of national consumption. Luxury items will cost far more, motivating cheap-skate rich people to buy overseas and maybe even leave the country. State sales taxes will not be eliminated. The additional taxes can effectively raise the tax burden to 30% or more.

World wide, tax rules share one thing in common; they start out simple and end up complex. Exceptions are born slowly as new realizations of unfairness are discovered and brought to the attention of the governing bodies. Already the complexity of the Fair Tax proposal begins as exemptions pile-up. Beginning with the “prebate” for the poor. Then comes an exemption for families with children. Next, the middle income families feel cheated because they earn too much for monthly prebates and earn too little to be called wealthy. Next, since the Supreme Court now considers corporations persons, folks will begin to demand that they pay the Fair Tax as well. Then particular corporations will petition/lobby for tax exemptions, and get them.

They want to scrap the tax code, which is a very tempting piece of bait. But while they start over with a new tax system we all have to wait for them to learn their lesson and pile on exemptions to the point where our new tax system will look an awful lot like the old tax code. 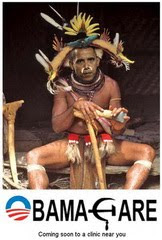 When the simple folk rise up from political obscurity, be wary for they know not exactly what they want, but they do know what they hate. For the past couple of years the Tea Party out of the United States has been a confused and dissembled group of disenfranchised, disillusioned, economically frustrated, scared of change, narrowly informed, non critical thinking, religious and simplistic conservative bigots and very likely a smattering of racists.

In a measure of their naivety of complex issues and ignorance of how politics works, in a room of some 600 people at the recent Tea Party convention, nearly 80% raised their hands when asked if they “had never been into politics before.”

Mob: a large or disorderly crowd; especially one bent on riotous or destructive action.

The original tea party of 1773 were a mob of merchants and locals concerned with taxation by England without representation (or favor) of the local populace of the colonies. But it was not just tea taxes that upset the Massachusetts colonists; it was a build-up of tension brought about by the Stamp Act, the Townsend Acts, and the Boston massacre. The modern Tea Party is a mob made up of right-wing “pure” conservatives angry and hateful at taxation without representation (in Tea Party meaning: taxation without their support) and debt. But it is not just taxes and debt that upsets the modern day Tea Party, it is a build-up of tension brought about by years of watching liberalism and socialism take increasingly prominent positions in society. For an outlet of this tension the Tea Partiers have found scapegoats of programs and people with little ability to defend themselves within the media of the right-wing. Scapegoats like president Obama, government run anything (except for our military), infrastructure based earmarks by congresspersons, gun control laws, regulations of the “free market,” health care reform, welfare and entitlement programs, government overreach into the business of the states, same sex marriage, economic bailouts, abortion rights, RINOS (republican in name only), and religious restrictions by mandate of the U.S. constitution and it’s pesky separation of church and state.

To the Tea Party “limited government” means that government should only protect us and keep us militarily secure from our enemies. They use a Thomas Jefferson quote to justify this ideal: “The legitimate powers of government extend to such acts only as are injurious to others,” (found on a Tea Party web site). Jefferson was speaking in generality of the purpose of United States government. “Injurious,” in this quotation does not only mean physical harm by a foreign military, but in all matters which could be injurious and in which government intervention, enforced through written law, can protect individuals from harm. Such government interventionist laws as making slavery illegal nationwide, workplace laws that protect the vitality and safety of the worker nationwide, civil rights laws that protect minorities and individuals from harm and unfair treatment nationwide, and business regulation which protects the populace from monopolization and unfair business practices across state borders.

“Free speech” in Tea Party nuance means that the religious should be able to express their faith through government entities like in a public school. Support for the 2nd amendment, means all gun control laws are unconstitutional (never mind that pesky Militia part). Support for the military is support for supreme United States power, empirical status and interventionism toward the favorite enemy of the moment. “Secure borders” is all about immigration, illegal and legal, and supporting English only in all government communications and in the schools especially. Their love of country is jingoism pure and simple (extreme chauvinism or nationalism marked especially by a belligerent foreign policy).

The movement and the members of the Tea Party were indeed born yesterday. But their ideas are as old and as wrong as conservatism itself. From Birthers to Gun Nuts to Pro Lifers, the Tea Partyers revel in their own justification of their conservative ideals. Despite the successful history of U.S. style liberalism they are certain they are right. They have even made their own media to further cement their right thinking ways. They now live in a bubble of right-wing media. A comfortable place for a Tea Partier to be
.
The world we live in is not black and white and unfortunately we do not vote by jelly beans in jars labeled with issues as the Tea Partiers might wish. We vote on a huge sundry of modern issues, some complex and some simple, using representative democracy in a republic. And unfortunately for the Tea Partiers we do not live by the literal words of the U.S. constitution, we have a Supreme Court which relates our modern day problems to solutions offered under constitutional foundation – that is clearly how the founders thought it should be.
Posted by James Mason at 12:15 PM 2 comments: