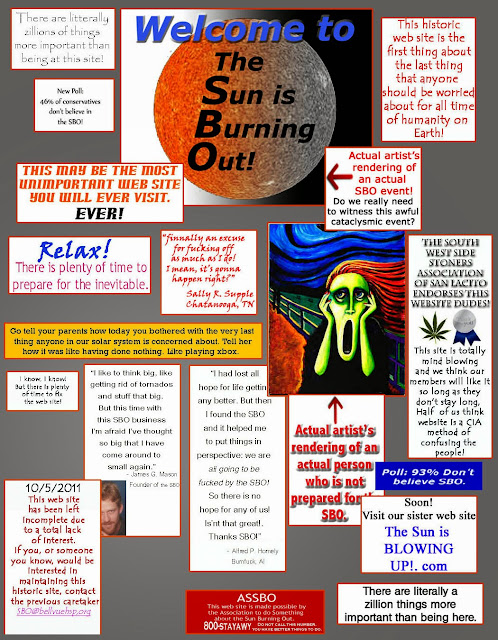 The Sun is Burning Out cult feared the inevitable. I thought it was a reasonable fear. Although a bit premature. Of course, I hold true the scientific hypothesis that the Sun will blow-up like a giant bubble and burst (a Red Giant stellar event), but they thought it was actually burning out, very slowly. At the time I found the SBO cult, the process of Sols’ death did not matter very much to me as it was an event, not on my calendar yet. The cult’s basic premise remained intact. They faded out after about 3 years, but the site was untouched for almost ten years, then gone one day, after a simple small message had appeared on its front page. But I am glad I had saved their images and banners, for posterity and for a lesson to be taught to someone, in the future.
I remember being impressed that they actually had a couple of retired astronomers they had video interviews with, saying seemingly absurd things. “The scientists must have been padding the old’ Social Security income.” I thought.
They took solace and peace in expending their energy on a futile attempt at advocacy of an issue, with complete, only imaginable, catastrophe occurring in our very, very, distant future. They seemed be living in contradiction. They would make clear that their obsession may be a waste of time and may be the most unimportant thing a person could be concerned with. But still they came and grew for a few years.
Towards the end of the cult, most members shared an odd appreciation for the absolutely fruitless efforts of somehow stopping the sun from burning out. Some were sharing a mutual feeling, that they had achieved a Zen like peacefulness in the pure futility of their purpose. Because they had found the epiphany that they had all the time in the world.
There was turmoil within the organization, which occurred between those embracing the Sun is Blowing Up hypothesis, and the founders and their loyalists who maintained the whole things was a burning-out issue. But a picnic was held for two summers, where the SBU’s joined in volleyball against the larger SBO’s, and they eventually accepted they had strong mutual concern. There had been a newsletter, I have since lost it, where the whole guff of understanding was explained, and the truce was called for, prior to the first picnic.
I thought the SBO’s highly amusing. It was very entertaining to check-on their website now and again. They were for me a sociological study in beliefs, paranoia, and fear in general. It struck me as such waste of human energy since humanity has so many priorities on its plate in this millennium. Never mind what’s on our plate in about: 2,500,000 millennia. I thought and concluded, “It’s good, I guess, that somebody is worried about this. I think there’re enough people now, on Earth, that we can happily allow a bunch of them to be concerned with Sol’s inevitable death. Who knows? Maybe we can stop it one day, inspired by the writings of these whack-jobs?” So I never insulted them. I respected their concern. Reason, I concluded, is not unreasonable, even it’s a reason for concern of something 5 billion years from now. It is just, a bit early.
The SBOer’s teach us lessons about life. About entropy, extinction, oblivion, dissolution and the many other concepts, of existence ending. About the constant fear of ending that remains in us all. They also cause us to wonder about the puzzlement, that is doing nothing to prevent our demise, when it seems out-of-control.  Because they are planning on an event, billions of years from now, they teach great patience and control of our desires for our survival. They cause us all to consider in contemplation our unreasonable fears of this time we are in now.

Live for today - not 5 billion years from now. Did the Buddha say something like that?

I created the cult. It was online only. Had one member. I was into getting really stoned and making humor web pages, around 1999-20002. I actually paid for the domain and hosting services. Had a chat forum set-up with fascinating running dialog from fake members. But the internet was still too young to appreciate it. There was no (large) atheist community to obtain the interests of, but places like AOL and Prodigy. And marketing your website was very difficult, very manual. So I moved on to a few months of making fake missing animal posters to hang around the neighborhood. There was the missing talking pigeon that looked like 150,000 others in my city. The childhood dog that eloped with its gay lover and was rumored to be hiding on empty properties nearby - an appeal to saving a romance, shunning dog-homo love, and returning to a boy his dog. And other important humor for my community.
There is a half irony here . . . SBO could only have been created by someone with too much time on their hands, or an interest in providing comedy (in reality). And, if you’re worried about an event billions of years from now, you are a candidate to join the SBO, because you feel you have a lot of time. So, I guess, if you have a lot of time, you can reasonably worry about something that occurs, a very long time from now. You might even be productive in your concerns. Who knows, how history will remember the SBO?