Keystone Pipeline is for primarily designed for water, not oil from shale. I'm sorry Canada. You'll get another chance when the Unites State's bread basket aquifer runs dry. That crisis is approaching so just hang-on. 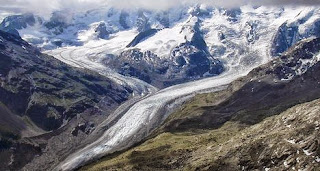 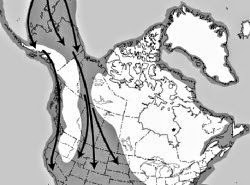 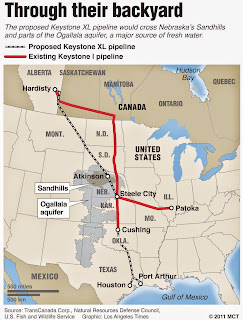 Foolish Americans: The Keystone XL Pipeline is for WATER (to save our asses and make Canada a super power we will bow to by the end of this century).

Just look at the glacier maps of southeast Alberta, where the pipeline begins. The town is called Hardsity, the glaciers are the 3 largest of 5 in all of Alberta, each within 200 klm of Hardsity and flowing toward the east. Strangely, the pipeline branches, to "storage facilities" in Illinois (not tar sands shale refineries).
Shale is incredibly inefficient to process. Not worth it for any nation. "NO SURPLUS EXPECTED!" (Canadian energy dept.) This story coming up. It's the first of many water wars strategies that smart nations are preparing for.

It is unreasonable to introduce a new fossil fuel that is far more costly to produce at this time, when nations are preparing for energy sources other than any fossil fuels.
If the purpose of the Keystone pipeline is to transport a fossil fuel energy commodity, It is unreasonable to think that the United States, where the majority of the of the Keystone pipeline will occupy, will benefit at all from the presence of the pipeline. Additionally, the U.S. has drilled over 20,000 shale oil fracking mines to date.

It is economically unreasonable that the people of Canada will see a surplus of any kind from extraction and refinement of tar sands oil.


The thousands of miles aqueduct just happens to zig zag very well suited as an artery of fluid distribution.

In comparison to current energy markets, it is unreasonable to expect that full production of shale based fossil fuel will ever be a competitive economic advantage for any participant in the global oil or extracted finite resources market.
The United States and many regions of the world can expect drought and water crisis in the decades to follow.
The proposed Keystone pipeline is built and tested with water, as if to transport water.

The locations of the pipeline make an adequate artery for distribution to important agricultural regions in the United States. The final point of the pipeline, in Port Arthur, Texas, is a major export terminal to reach the eastern United States by large tankers, and the rest of the world. This ability is tremendous in scope and prospect and so it is unreasonable that using the pipeline only for shale tar sands oil. The distribution of fresh potable water to the world.

The largest extractor of shale oil in the United States has just announced a 40% reduction in their efforts. They are not fools, it is very inefficient (relative to the cost of normal fuel production for gasoline). As gasoline is used less, its price is dropping, shale becomes even more expensive and foolish business, to extract and refine.

Even makes a detour of several hundred miles to Illinois, for storage purposes.

The Port Arthur, Texas final destination is to eventually be a distribution hub for fresh water for the world's needs.
The pipeline may be remembered as the first of many designed by strategy determined by humans following by nature's deposits of long lasting fresh water that will feed and nourish humanity for many centuries to come and may redistribute water on Earth, both to our agriculture and in our bellies and by distributing glacier born waste water to our localities.

Shale may be the most inefficient fossil fuel resource mankind might think of to substitute for our now developed manner of extraction, delivery, refinement, and consumer delivery of sources like crude oil, coal, nuclear and wind and solar energy methods of obtainment.

Shale, or Sand Oil, as the Canadian government calls it, has to be refined twice. The first time has to occur near the extraction point, after crushing, and requires importing butane and a mixture of chemicals referred to broadly as "condensates," mixing them just right (highly volatile production method), just to ready sand oil for transport in a liquid form, if that delivery is to be made easy, by fluidic transport using pipe. The second refinement occurs at a refinery no less toxic with no less a huge carbon footprint than crude oil refineries, to make the shale oil ready for market, flammable, liquid able, and make it smell like gasoline or another crude oil product.

Glaciers, as we know them at the surface of the Earth, are made from millions of years of snowflakes, compacting and becoming ice and becoming the fresh water that may save humanity, if we act swiftly now.

What is Canada really saying about the pipeline and their energy needs:


Canada department of energy is NOT forecasting growth in tar sands shale oil. In fact they predict in 2013, only 12% increase in production, from less than .5% of total energy production. It's for water fools. They'll have us over a water barrel. The largest American extractor of shale oil has just announced a 40% reduction in this resource.

Examine. Decide, all this for tar sands oil? The mid-west will not receive another drought, another dust bowl in the mid-west? It is expected actually. We have not prepared. Americans are champions of denial. First in non preparation for the future. We'll deserve this for our idiocy.

Posted by James Mason at 7:26 PM No comments: