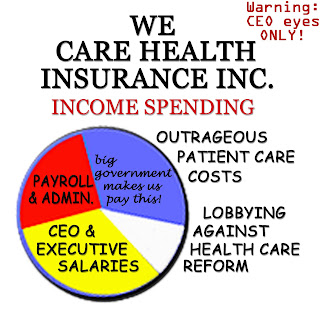 Since monitory and other numerical figures vary by interest group whose sources vary by funding. Statistics and figures will be absent in the following FAQ. Instead the document will focus on the reasoned pro argument and con dispute.
Those other nations triage their patients in order of need so an average wait is going to be longer for elective knee surgery or rhinoplasty than for kidney transplant or appendicitis repair.

We don’t have to be like any other nation’s health care. Ours can be our own. The best of other nations’ health care systems and the creative new methods we are capable of, will make-up a new Single Payer Health Care system.
You already pay for their health care. Except that by the time those without insurance get to a doctor, or hospital, their ailments / diseases have progressed to their most expensive stages. Costing the taxpayers far more, easily surpassing funding enough to have bought them health insurance in the first place. So, the absence of coverage for the poor and middle class, who can’t afford premiums and deductibles, costs taxpayers a lot of money, billions.

What’s more fair to the taxpaying American, every single taxpayer paying for everyone’s health care at once, or allowing tens of millions of taxpayers (yes they all have jobs) without affordable health care access to enter the system upon charity conditions (taxpayer subsidies to hospitals) with their diseases advanced to a point of expensive post onset care? The latter is not fair.

Under and new SPHC system stopping fraud will have to be paramount. The ideology that we are all spending our own fortunes, our own hard earned dollars on each other will have to be understood widespread throughout the system, by patients who will be welcomed whistle blowers, by everyone from kitchen employees to the chief surgeon.
A new anti fraud division will be necessary. It must draw a balance between punishment and repercussions for just being investigated, so that those subject to investigation are not threatened should they be innocent.
Some of the types of fraud to watch for will be: over treatment (padding the bill) tough to prove, best discovered by the patient. Over billing for treatment (especially common now towards Medicare and Medicaid systems due to their absence of investigative funding). Equipment over billing and over production and over manufacturing: titanium wheel chairs are not necessary, carved / milled walking canes are a luxury and less sturdy than aluminum canes. Over medicating by physicians; doctors are susceptible to the influences of pharmaceutical company sales persons and their perks, i.e. vacations, flights, golf junkets. Doctors often pile-on medications to the point where side effects from one medication are masking the side effects of another, creating a dangerous situation for the patient. The alert patient is the best whistleblower for this type of fraud and abuse.
If its strict and restrictive environments that doctors and nurses don’t like, they should leave now. Because, under the current system the greatest pain in the ass is the health insurance companies that determine if a procedure can be paid for – literally a faceless voice on the phone dictates to a nurse or doctor whether or not a healthful or lifesaving procedure can be performed. Some hospitals dedicate an entire floor or wing to desks of workers whose main job is to communicate with mega bureaucratic health insurance companies. Does that seem right?
Under a SPHC system the Administrative body or the SPHCA will allow any and all procedures deemed reasonable by the doctor in charge.
Quality should be rewarded with monitory bonuses and promotions to health care workers.
Under an SPHC system funding will be made available for health care professional higher education and even the building of new campuses dedicated to professional training in medicine.
Democracy is the answer to the checks and balances needed to ensure that a SPHC system continues efficiently and without fraud. A hierarchy of councils which ends at the top in Washington D.C. at the SPHCA and a cabinet level appointed bipartisan committee members totaling 9 members (for instance – a tie breaking number of members i.e. the Supreme Court).
The SPHCA must be created via Constitutional Amendment. The main purpose of this would be to separate the funding from the U.S. Congress, which could be swayed by power shifts to functionally change the SPHC system by removal of funds. The second reason the SPHCA should birth via Constitutional Amendment is that the people should be behind it in unanimity. This will ensure an extended life of the program as generations will recall in memory why they created the SPHCA.
The accountability to the consumer should begin with democracy at the local level (as per Clinton Health Care Reform plan of 1995). A Health Care Regional Council District (HCRCD), several or more than one in each state depending on population and number of health care facilities, will be voted in by the local populace during each general election (every four years). This local council would review all consumer complaints. It would review all medical professional complaints. The council must contain a minority of medical professionals and a majority of non medical professional citizens, and this will require run off electioneering allowing election boards to chose second tier candidates to meet the mandate.
The spirit of competition does not have to die with SPHC. Consumer information plays a crucial role in maintaining and building the quality of a facility and its staff. Internet and mailing pamphlets must be prolific in each HCRCD ensuring citizen awareness and input. No citizen should have to be limited to receiving care in his or her own local HCRCD, this is the competitive edge maintained by the consumer/citizen. This edge raises and lowers the numerical value points of any given facility.
You must ask the question of yourself: Do I like democracy? Has America worked pretty well? What if I knew a full accounting of the quality and performance of the hospital in my local area? What if I never had to deal with a health insurance company again?