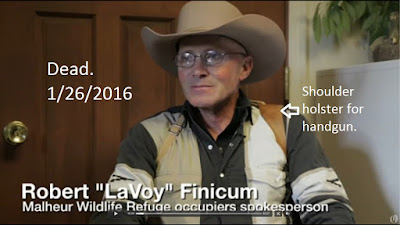 
In a democracy impatience is rewarded with failure. Robert "LaVoy" Finicum is now a dead man. His peer influenced impatience and unwillingness to use democracy as a civil right and a practice, has resulted in his body being shot dead. The Oregon standoff that occupied our federal property in order to garnish media attention to a false cause has lead to bloodshed that had been expected and fantasized by many impatient and mislead yahoos.

The camouflage wearing gun toting yahoos of the western regions of the United States took it upon themselves to confiscate government owned property and make a stand. They used the words “the founders,” more than you and I say the words “Pick up ________ at the grocery store.” They are self-glorified. They wanted something specific for themselves. They wanted their own way on federal land designated protected by many people smarter than them many years ago. They followed the yahoo Aman Bundy, who last year because a man named Cliven Bundy, owed the federal government almost $1 million in greatly discounted cattle grazing fees that he was negligent in paying and so was told to leave the conservation land he was occupying, then took a militant stand claiming vague and concocted rights of freedom of a man. He was a gun toter and just happened to also believe that the federal government was coming for his guns and so he attracted many other camouflaged yahoos who also believed so. It was another case of bored men with guns finding tyranny to be contested with “militancy,” and so then get media attention in doing so. There was never any tyranny. There were laws created by masses of people using democracy. They have disrespected democracy and they should suffer the cost of violating our democracy.

mis·cre·ant ˈmiskrēənt/ noun. plural noun: miscreants
A person who behaves badly or in a way that breaks the law.

We are a nation of laws. We are an example on Earth of laws governed by the people. No matter what you think of a federal law of long standing, the manner in which you have to affect a change in law has to be civilized. That is: If you respect what the United States is. These gun-toting quasi-pioneers are disrespectful of what our nation is.

The media has called them “militants,” and I feel that is an appropriate term. They are not patriots although they wish in their grandiose ideal that they were. They are fantasizers of a time when men fought the big bad government to get what they (specifically) want. Except one sheer fact that they ignored that differentiates them from those “founders,” whose label they enjoy affixing to themselves was that the framers of the rules of this government that does allow us more freedom than almost any other nation Earth, were fighting a King - not fighting a people who form and manage and rule a government. A government represented by the people: the definition of democracy.

These yahoos are an insult to all of us who respect a democratic government - government ruled by the people. They are not the people. They are a fringe element of bored men who didn’t get exactly what they wanted. Because they choose a militant stand that is self-aggrandized as glorious and dramatic, they violate the basic premise of civility that we all are supposed to operate under.

They did not use democracy. They used militancy. They did not take the time (decades of ground pounding work) to garnish agreement with majorities. Because they could not and they likely knew so in their consciousness that in their impatient time here, they were greatly outnumbered and it would take a generational time to see the agreement with their glorious and dramatic and rebellious and mechanistically concocted stand.

They have violated our laws and so are not militants they are miscreants and should go to jail.

As of Thursday, one of the older gentlemen who had taken up their concocted cause of glory was shot dead by a federal agent as he was exiting his truck with a gun in his hands. Account of the action that resulted in his being shot dead is different, now as one of the glorious defenders of the rights-of-man is now saying he hand his hands in the air. This is to be expected. But we must all consider that these men were conducting an illegal activity with guns. Not with signatures, not with democracy and not speaking in civil terms as a society like ours should be. He got what he fantasized for years what he would get - shot by the big tyrannical government. Rest in peace you foolish man.

USA Today, January, 28, 2016:
“Protest leader Ammon Bundy, 40, was one of six protesters stopped Tuesday at a roadblock 20 miles from the refuge. Robert "LaVoy" Finicum, 55, a soft-spoken but defiant Arizona rancher, was shot and killed. Officials refused to provide details, but his identity was confirmed by his family. Bundy and the other four protesters were taken into custody.”
http://www.usatoday.com/story/news/nation-now/2016/01/28/fbi-arrests-3-more-protesters-standoff-winds-down/79446598/


Angry and impatient gun toting assholes: This is political opinion. It is what formed this nation. We are allowed to do this in a civilized democracy. Write your own opinions. Practice free speech. Practice democracy. Keep America free in this manner.