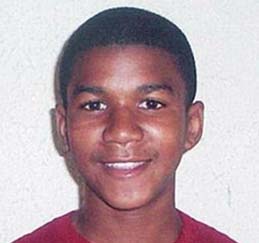 The Trayvon Martin killing is an example of the height of cowardice and fear and stereotyping and racial profiling. Additionally the so called "stand your ground law" and the State of Florida and the National Rifle Association for supporting it, and the inherent racism in the Florida legislature share blame for this tragedy because GZ (George Zimmerman) knew clearly of this law's existence and he likely felt empowered by it enough to aggressively approach the unarmed seventeen year old who was walking in the rain and was holding an Arizona Iced Tea and a bag of Skittles candy, who lived less than seventy feet away.

In an emboldened haze of reality television cop show action/adventure, with his trusty 9mm holstered snugly in concealment under his windbreaker, with several mixed martial arts lessons under his belt, and with an almost associates degree in criminal justice, this guy GZ took it upon himself to be the neighborhood sheriff, judge and juror, and he approached someone who was definitely not committing a crime who unfortunately likely had just as many firmly entrenched judgments and fears about persons like GZ, who Trayvon perceived as a "cracker," as he told a friend on his cell phone before GZ approached.

Only a cowardly person who has firmly established judgments and evaluations about types of people, different races and different cultures, who walks about with a concealed handgun, would turn a confrontation sought after by himself that did not have to happen into a physical confrontation with an unarmed person and then when on the bottom and losing the fight, turn that into a shooting death and then plea "self defense." Instead of claiming an accident which might have been accepted and then manslaughter charges would be faced, instead of wiping down his handgun and placing it in Trayvon's hand to cement a self defense scenario, he was still thinking of "stand your ground" during the time he waited about for the police to arrive at the crime and quasi self defence scene. GZ honestly thought his decision to shoot Trayvon was self defense, at the moment. He's in denial big time about his insistence. During the scuffle I think GZ was taken by surprise by the speed and intensity of Trayvons' violent response toward him [thin people can throw their arms faster]. I think that before GZ knew it he was on the ground, on his back and unsuccessfully blocking Trayvons' punches to his head. I think the fourteen shouts for "help," were GZ's cries in desperation which began the second he realized he was then losing the fight. GZ's father remarked upon first hearing the 911 recording with the fourteen cries for help "that is absolutely my son's voice . ." Where Trayvon's brother was not sure at first. GZ's voice had become his little boy's voice, I have heard grown men transform their voices into this little boy voice when about to die and crying out for their mother. Trayvon was winning, he was in a macho moment, he was defeating his fear in a moment he had imagined might happen to him, being  attacked by a cracker.

GZ is guilty of somewhere between first and second degree murder and of being a pussy pretending to be a cop. He should serve 2-5 years in a State lock-up for violent criminals. Because of his infamy he will not be a welcomed fellow inmate in a State prison which will have a disproportionately higher population of young African Americans than in the outside world. Therefore GZ will likely spend allot of time in solitary confinement for his own protection. But I am conflicted. I do not wish solitary confinement for the worse murderer among us because it is a form of legal torture by the state and I wish prisons would find an alternative to this mental torture. Of ex-convicts having been in solitary two out of three men lose their minds and slip into an environmentally induced schizophrenia complete with chronic bad hallucinations, delusions, voices, nightmares and etc.. I hope that his guards let him out for fresh air at least twice a day, to reduce the effect of the torture.

Won't have to worry about GZ getting tortured by solitary. Son of bitch got off Scott-free! Race was not allowed to be discussed in deliberation or in the courtroom and that was a grossly unfair decision. Only one minority person was on the jury and no African Americans! Trayvon's peers were not part of that court at all. The Stand Your Ground Because You Have a Gun and You are Naturally a Frightened Coward law has to go! The gun madness has to end. Bullets and shells should cost $20 each right f*cking now! We should do that because that's how much we should show that we love our children. The cops need to be disarmed also for all of our safety. We could start hiring officers who are mature enough emotionally to truly realize and accept their risk of death and actually have balls and are willing to take risk before impulsively firing their firearms/penises at unarmed people.

"This observer of social injustice rests your honor."
Posted by James Mason at 12:35 PM