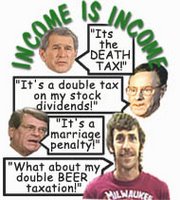 To the Republicans who try so hard stop the estate tax, the money earned watching stocks grow from a rocking chair, buying and selling real estate, or by inheritance of grandpa’s millions, is somehow superior. Not like our paychecks spent in five days on food and rent.
Don’t believe it? Ask the billionaire Waltons or the Mellon-Scaife families what their lobbying activities have been these past five years or so.
Labor spawns all income. Even grandpa’s millions began with one movement of someone’s labor somewhere. A man shovels dirt and gets a dollar that has been taxed through the duties of his employer. He carries it to the store and the owner of the store later draws his profit, he puts that dollar in the bank, he pays his share of community taxes, he contributes to our General Welfare insurance programs. Following that dollar every circulating dollar is taxed in the act of transit as income. Because in transit there could be no other way that it came to be in existence, except to be someone’s income. Simply: all income is income. When we stop letting politicians who favor the rich try to convince us otherwise, our system of taxation and distribution of the shared revenue burden, will be more equitable.
Teddy Roosevelt gave us the Estate Tax in 1916, he claimed something to the effect of “ . . to deter us from becoming a nation of those who work and those who don’t have to . . “ In other words, a plutocracy, where it might be that every one below the social ladder works solely for everyone at that top rung. This might have eliminated, or made scarce the hope and opportunity the poor of the time had still expected. If wealth gets handed down, untaxed, then it can grow unhindered in the hands of one family for generations. But the other reason, I’m sure Teddy had in mind, was that all income is income. He saw the regal mansions of Long Island, sprout up around him like big weeds, he realized their occupants were getting away as favorites to society, and this he saw as not equitable.
Posted by James Mason at 12:58 PM