ISIS: A City Like Kobani - A Method of Peace that is Merciful, Efficient, Swift

2/23/2015: Kobani is finally cleared of ISIS. But not without 5 months of blood and suffering and many deaths of innocents.

"If we can do this the United States will be seen as the most intelligent fighting force on Earth and remembered as so by allies and enemies for . . . a very long time. Honor restored. Pride in our conquests will by experienced. Knowing we did everything we could to create peace peacefully." 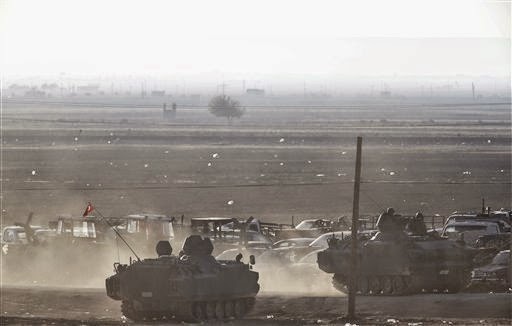 From just behind the Turkish Army. At the Syrian border. Kobani less than 1klm in background.

Regarding Fighting and Protecting : How to Save a City from Enemy Attack. A plan to end local urban/suburban conflicts with greatly reduced suffering and expenditures of resources.

As of this writing, is closing in on a partially abandoned city called Kobani, on the Syrian border. In the , we would call Kobani a medium sized city, like , or . About 200,000 people have already evacuated the city and its regional towns/villages. It has been reported there are perhaps 2000 people left in the city, who could not leave, or refused to. The Turkish army now has that democracies' permission to involve themselves in the war against . But due to the complex political environment, the army sits on the hilltop above the city on the Turkish side, across from Kobani (image above), with tanks and APC's, watching the smoke and explosions as moves-in. Many in , especially Syrian refugees and their families, are very frustrated with ' unwillingness to go-in. They are afraid for those left within the city and angry as their brethren and family are dying and being wounded, less than a mile from those who could be the city's salvation. Leaders and the UN are predicting will massacre thousands when they overtake the battered city, which may happen today.

What if there existed a swift, effective and honorable and dignified way to end a conflict like this one? What if there were a reasonable, efficient, bloodless, merciful way to stop a horror before it happens, with a passive, innocuous, yet aggressive attack?

We sedate-the-shit-out-of those bastards while they are fighting in the city. Everybody drops.

My thought is we sedate this area, with drugs, dispersed through the air. Then go in while everyone is unconscious, disarm, apprehend, destroy enemy military equipment (in one place, with one bomb hopefully). We quickly attend to the wounded and sick, allow the population to return. Set-up a military front way south of the city, to ISIS's new involuntary position. It would be the most peaceful attack, and liberation of a city, from enemy attack and occupation, ever seen. The sedative could last 10 or 18 hours. Enough time to disarm all of the unconscious enemies, move their bodies onto trucks and to a temporary prison. We could establish full control of the city over any army on the ground before anyone has awakened.


We have all seen it done in the movies, and don't think our military's brightest minds have not seen it also, and have made provisions ready. If it works in an area like Kobani, it will work almost anywhere. If done with a strategy, it may be very effective and safe for all sides. Justice can be served without extreme violence. It's going to scare the living shit out of and make each of those assholes consider the new remote possibility that they will ever be successful with their religiously evil broad goal to take over the world.

Candy Bar: I enjoy thinking, that in the 1960's, in the Pentagon, every officer began to have this day dream, repeatedly. It's why, I'm sure, we have this capability now. And we should not be afraid to use it against terrorists. From Goldfinger, Pussy Galores' Flying Beauties and their textbook Attack on Fort Knox, Kentucky:

To do this with moral confidence, we need to extinguish our old imagery of what a gas attack is. We need to realize that this time it's about sedating, not killing, and without even intention to cause suffering. We are not attackers - we are defenders. We are far-from being seen as dictators attempting to extinguish opposition to democracy by genocidal attacks. We will not be seen as any such attacker after Kobani is cleaned with this method.

Take your balls in your hands and go visit the CEO of Pfizer, or Lilly. Have our boys take-over a big pharmaceutical plant and immediately make tons of this sedative, quickly. And consider, don't exclude a shit-load of lithium and Prozac in that mix.

We have the chemical technology to do this effectively without greatly harming numbers of innocents who may still be in the city.

The problem with traditional gassing of an area this large is that the combatant or not some may be harmed. For example, unless the chemical agent is only absorbed through the skin, or any mucosal tissue, as its  primary vector, the feeble of lung health may die from the dispersing of the sedative gas, depending of course on the chemicals used, and their density in the atmosphere. This population may be few in numbers, but may include those with COPD, babies, children and adults with asthma, and small animals, the elderly with weak cardiopulmonary health may suffer, and in this particular case some may die.

However, we could drop gas masks on the city, in certainty that some of those who will need a mask, get one. Of course, some fighters may have gas masks (but I have not seen one in media, have you?). Those with masks that filter the drug may continue fighting - if it's an aerosol with its primary vector as lung tissue. Again if the drug does not absorb through the skin or a mucosal membrane, they'll try to fight-on. But perhaps not many or all of the enemy will be equipped? As , in this scenario, if some of your comrades don't have protection, you lose them by your side as they become unconscious, your army is then cut into a small fragment of what it was prior to the gas attack. You must then consider surrender or conduct a fast retreat.

Note: It is possible the chemical used would nearly comatose the population, requiring an antidotal solution for each being revived. It would be an orderly manner of reviving the city, by small a number of citizens and enemy at a time.

If we think our military does not possess the ability to do this, that's foolish. If we think this same branch of our military has not prepared for evading the gas mask defense of this attack, that's foolish.
If you think the plan is ridiculous or implausible or abhorrent even, you don't know our capability. You may have little confidence in our military and our national security infrastructure, and you may not trust warring men at all.

Of course, this idea has been planned for and likely already tested in simulations; live and computer driven. Possibly, the chemicals are likely ready to go in sufficient amount - planned for as an emergency alternative to an armed crisis, and planned for as a manner of mass public crowd control. It takes balls that's all.

Our Commander in Chief will require a willingness possibly to cause the deaths, of some few innocents.  Their lungs and hearts won't be able to handle the sedation, who don't get a mask in time (if masks are effective).