"Quick! Toss a Blanket of Denial Over that Angry Muslim Family!" 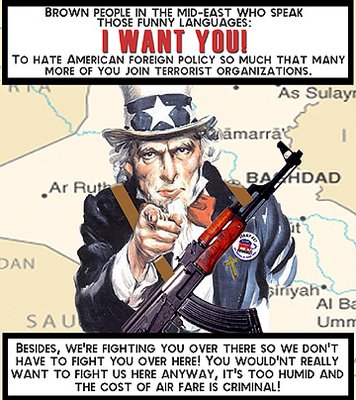 If anyone thinks for one moment that George W. Bush and the Cheney administration were ever intent on stopping terrorism, then they are thinking deficient loyalists of the authoritarian variety, followers, and champion deniers. The current leadership in Washington D.C. has not shown any evidence, through one single example, that they want to actually stop terrorism. Don’t get my allegations wrong: they want to kill terrorists, and their families, and anyone in the same neighborhood, and anyone they attach a new label of terrorist upon. But addressing the cause of the actions of terrorists is not in the White House rule book. In fact what they have done is to increase the numbers of persons who would be terrorists against us one day soon enough.

Iraq is in itself a recruiting tool for terrorism better than any could be. Americans killing tens of thousands of Muslim civilians with our fancy jets and missiles. Occupying a formerly secular and controlled nation for four years. Failing to rebuild our own destruction against a nation that never attacked us and had nothing to do with Nine Eleven. The repeated bombings of Baghdad and the atrocities of the Fallujah bombings alone were enough to solidify hatred against us. We set military bases in more than two hundred locations around the world, we established an air base on the land walked upon by Mohamed and left it there for more than ten years, kissing-up to a ruthless Saudi regime that oppressed its people tirelessly.
Many American Conservatives (about %27) just don’t get this. It is as if they are not capable of grasping causality. I continue to hear them phoning in to CSPAN or Air America Radio and being completely oblivious to the concept that being in Iraq, and killing more people, just makes more terrorists. That is contradictory to “fighting the war on terrorism.” But they don’t get it. They’ll say “ but if we get enough of them they’ll learn that we can’t be messed with, that they won’t get away with it again.” Well guess what my conservative village idiot, they are getting away with, Osama (if he did do it) is still not apprehended or dead.
Common statement: “Either we fight em over there or we fight em over here! I’m with Bush on that!”
Best reply: “You moron. Do you actually think that statement makes rational sense? We’re not fighting terrorists over there! Barely %5 of the insurgents in Iraq are from a foreign country, and those few are probably there because they hate our guts and they had some time off, like the majority of Muslim males, in the mid-east ages ten years old to ninety-eight! If anything we’re making more terrorists and providing a American-killing training ground for would be terrorists. Jesus H. Christ either you really do have s#@# for brains or you don’t take five minutes a day to read something that doesn’t say Fox News on it!”
Best evidence that the Bush crime family has no intention of stopping terrorism is that not one legitimate American arrest has been made of an actual terrorist. Not one trial of anyone legitimately proven to have connections to terrorist organizations. Sure, there’s been a coook or two, terrorist wanna-be's making confessions of Martyrdom grandeur. But no physical evidence, no reliable witnesses, just American political grandstanding. Back in the good old twentieth-century we used detective work to arrest terrorists, conduct real trials, and throw them in prison for life. Police work thus far has been focused upon violating the privacy rights of the rest of us, to find a few. It is our far more enlightened kin across the Atlantic that have been successful. The British and the Germans and Italians and the Spanish, don’t bomb their suspects into oblivion like little boys squashing an ant colony with a basketball on a boring day. They use good police work. They creep around their suspects and gather information. Silently, smartly, with advanced technology and under cover operatives, they actually find terrorists. This type of intervention is a real night mare to a Muslim extremist. Being arrested means he might spend his life alive in a prison cell – nightmare.
Posted by James Mason at 7:18 PM No comments: 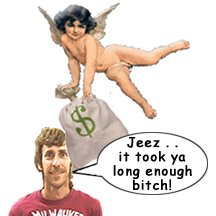 Ahh the glory years! Those hopeful times between the years of ten and thirty, when all was possible, when turning around a misfortune was always possible, when that feeling in the gut told you that one day, you could be rich! You the reader are a relatively young American Conservative who supports all efforts to better the economic plight of the wealthy and corporations, because they are like you, or so you think. That feeling you could be rich, has set you apart from the crowd of coupon cutters below you, and that separateness was well justified because society seemed to encourage it. You’ve carried that destined feeling with you into your young adulthood.


To defend that feeling of promise of fortune, you find that ignoring the plight of the poor helps in maintenance of the egocentric ball of future-fantasy that is embedded behind your daily thoughts. Your coldness for those riff-raft, in a way, proves that you are very different. “Why I’m obviously country club material!” You may tell yourself.
Rhetoric from the principle speakers for the political right wing aid you in justifying your attitude, and you have used these one-liners whenever someone questions your detachment to the poor. “They lack responsibility for themselves!” “They need to pull themselves up by their bootstraps – like I did!” “Anyone in this great country can make it – they just need the drive and the discipline!” “Its all those government handouts, its weakened their ambition, they’ve all become complacent!”
You grew up watching movies and television shows that reinforced the fortune destiny. At least once a week you watched some portrayal of a poor kid making it big – like you were certain you would one day. An impoverished Arthur pulls the sword Excalibur from the stone and his fortune is changed. Willy Wonka turns over his chocolate factory and fortune to the young and desperately poor Charlie Bucket – because of his honesty. The King of Persia falls in love with and marries the modest school teacher, her fortune changed dramatically. The tattered and common Eliza Doolittle is sculpted into a society lady and marries her mentor into a charming and wealthy life. Poor Aladdin finds the treasure of gold and a genie to grant his wishes.
Criminals also appear in these portrayals of poor gone rich. Steve McQueen in the Chase, escapes with a large cash booty and the pretty girl. Clint Eastwood kills off his competitors, the Good, the Bad and the Ugly, to win the buried cash fortune. In Oceans Eleven, Frank Sinatra robs casinos and escapes with millions. Of course there are dozens more examples to find. This genre’s theme is that a likeable criminal character (who must also be handsome or beautiful), is identified with by the viewer or reader, and he or she makes good in conflict against the odds of society.
As you, the American Conservative, travel through your life, recurring clues maintain the destiny myth within you; like the nice looking used car your grandfather just gave you with no questions asked. Or that four hundred dollars you won in the lottery, just one number short of the big multi-million dollar jackpot. That twenty dollars you found on the floor of the grocery store. Certainly these are signs of the fortune to come, right? It is a form of superstition, no doubt. It is so engrained you wouldn’t recognize it as such if a psychologist strapped you into a couch and worked-you-over using everything in the book.
It will take defeat for you to lose this self aggrandizing characteristic of destiny of fortune. Not just any defeat, but a type of which you clearly see that you controlled the conditions from the beginning. You’ll have to take responsibility for the defeat. If you don’t you’ll just continue expecting the pot of gold to fall in front of you, and mentally spitting on the poor when they come into sight.
If you reach the age of forty, and you find yourself in big house, with a big car, and a country club membership. You’ll meet with your friends at the club and bark derogatory criticisms at the poor and liberals and the ACLU, and mostly you’ll complain about taxes. You’ll have an ego as hard as steel what’s origins are buried in your brain behind a dense foliage of nerve bundles. That ego will be fortified with certainty that you were destined to live like this anyway, that it was just waiting for you.
On a summer night by your backyard pool, at a cocktail party, someone you know will call you a “world class asshole!” right to your face. It is likely to be your wife. They’ll be absolutely right.
Now its thirty years later and you are on your deathbed. You had a carpenter engrave the headboard with the word D-E-A-T-H, just to verify the bed’s purpose. You are alone and starring at the ceiling and thinking while the morphine is doing its work.
“What was the purpose of my life?”
“It must have been collecting all this crap. Yes that’s it, all the crap, good crap.”
“I knew I would make it good.”
“Stinking IRS! They’ve taken me for a ride!”
“Now I’ll have to pay that wretched Estate Tax after I’m dead. That’s gonna hurt!”
“If I hadn’t collected all this crap and money I wouldn’t have to worry about the stinking IRS.”
“Huh. I wouldn’t have to worry about the IRS. Huhh.”
“The purpose of life . . . was not to collect a bunch of stuff and money. It was to contribute to everyone else. To take a roll in bettering lives as my own got better. That’s where the satisfaction is . . . . was.”
“I’ve wasted these seventy years on myself alone. The world could sure do without me.”
Then, bitter and disappointed, you shut your eyes and your heart stopped.
Posted by James Mason at 11:15 AM No comments: